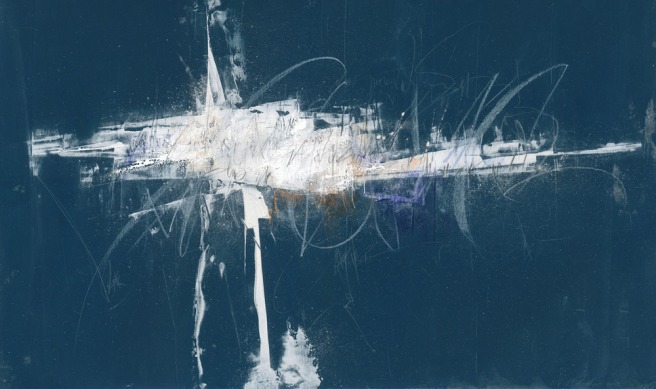 Sat halfway up the stairs, people moving up and down past, suddenly it happens. There was no going back. No turning around and saying, No thank you. I don’t want this. Instead I just spent the rest of that night and those that followed and the days, months and years after, wondering, Why? And later, How?

As if a spring snapping, there it was, the spring had completely un-sprung. Disconnected. From belly to mouth, no more. First the lead was broken, which was shock enough but then, even more confusing and challenging, I found no way to re-establish it’s re-connect. From navel to tongue, no more.

And so, that evening, as five us clambered into some parents car, pissed and fairly disheleved for a group of 14 year olds, I travelled back to our friend’s perplexed. I lay, sleeping bag next to sleeping bag, mystified, wanting to talk, to join in and cavort but refusal hit hard. I couldn’t. I couldn’t relate to my gut and speak, utter, joke. Somewhere a state of frozen had emerged. Somewhere distance had stepped in and everything seemed, felt alien. Wholly alien, as if I knew no one or no thing and, should I open my mouth, I would be lying and fabricating a truth.

Voice, I cried inside my heart, Where are you?

Then, stood in the playground on the first day back at school last week, waiting to pick up two gurling bowls of beauty who know not of such experiences, I smiled and said hello to two mothers I know and am fond of. And Boom! There it was again. As they spoke, chatted and laughed, there was the immobility. The words I muttered were laden with a self-consciousness that was heavier and denser than the content they were trying to convey. Where am I? Who I am? Am I slipping away?

Familiar patterns fuelled with muddy, tender brain chemistry, transformed a simple greeting into blackboard finger scrapping edge of panic and lost-ness. The kind of lost-ness that 30 odd years ago I knew only how to dig myself deeper into. Like stepping into the jungle with no torch.

With two kids in the back of the car homeward and still a taste of old stories combined with fresh faces, I try to gently piece my way through this shitty territory that rose too familiarly in the playground that afternoon.

Soph, my love, I tried to come in. Soph, I see you’re freaking out. But the volume of running in fright and jumping ship was still too loud in vibration to get through to what was beneath. Until, however, I twigged.

Soph, your uncle is dying. Your friend is unwell and your relationship has been at it’s rawest for years. You landscape is shifting and changing again. It is too soon and the pain you feel and the fear you feel is very, very real. You have not long moved from one city to another and you are still finding your feet, which I know in many ways it feels like you are doing so well at but don’t be fooled. The ground is still moving and this will take a while. Years.

Soph, you are hurting, my darling. You are feeling lost. And confused. You are still making sense of decisions you made regarding your family, which came by necessity but are still fucking fuck-some and horrible-some and there is still great loss, alongside the deaths of your mother and grandmother, to bare witness to.

And, as I listened in to this wisdom, old pages from old chapters of my life appeared as if I had just stepped through the doors of liquid time. Here I saw my 14 year old self, deeply confused and ashamed of the disconnect she experienced that night on the stairs desperately trying to piece together in the years after where it all went wrong but, strangely, never looking behind her into the widths of her life to see what had triggered such a strong and difficult reaction.

I still don’t know what had caused it that night and perhaps I never shall. All I know was that it was bone-rattling painful and, after a simple moment last week with two friendly souls and feeling my jaw joints disengaged and efforts at conversation feel as though I was wading through gunk, I realised something big.

The ground that is shifting in my life these last few months has knocked me to my core and it feels far, far too soon after so many, too many changes these past few years. My beloved uncle is one of two family members I still have a relationship with. His death will leave my aunt, who has lost three siblings, two siblings-in-law and her estranged mother in just over a decade, completely bereft. My aunt is my lifeline back to the blood whence I came. All other ties are no longer. Inside, in the caverns of my heart and the veins bulging beneath my skin is a crappy pulsing fear of orphanage and abandonment.

It’s a tricky one to hold. Longing to belong and belonging to have family fierce on severing connections and love. Heart has never fully learned how to carry this load. It’s unbearable most of the time. And of course self-blame jumps in and at times, self-pity too.

But I realise, this is what I was holding at 14 years old when Voice disappeared. I hadn’t the appreciation back then nor the understanding but, with no one to reach out to all the anger that I felt turned inward and my sense of disconnection grew more and more. Whatever it was that instigated the spring from gut to jaw to snap, I realise my world was feeling as shaky and vulnerable then as it is now but I just had no lamp or map at the time to navigate my way through. I realise now Voice disappears when my world appears to turn upside down and each time it happens it brings me back to the first time I experienced abandonment. This my cells and marrow know was way before 14 years of age; the stairs that night were simply a first glimmer into a journey of conscious enquiry.

And now I look back to time after time, feeling overwhelm of not quite being present with folk around, feeling numbness and tightness in my throat, feeling a half smile in my confusion that tries to fill in the gaps and hopes no one will cotton on. I see underneath the tapestry of two brown eyes, an earnest face and tangled sea of dark and greying hairs, a delicate web of a very young beating heart that has swum for many years in uncertainty and loss. It’s time now not to run when Voice wanders but instead start acknowledging, with all the fear and discomfort it brings, the weight of what it’s roaming is telling me.

This hurt is primal. This edge is one that was not earthed in early years but instead scorched with trauma and terror. I am beginning to recognise it no longer has to hide no more. I will honour to no longer make it unspeakable. I will act as midwife, however hard it is and however old habits spurn disassociation, to enable Voice to be born anew.

Tears and silence it seems are the first port of call.

If you see me here, I will try not hide.