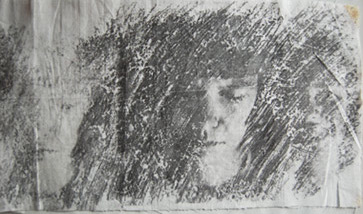 In the summer of 1991 there was a revolution that woke up my world.

My boyfriend at the time and I spent the college break in London. I worked making sandwiches in a wholefood café, leaving early morning and returning home by lunchtime with buttery soft hands. He worked at night in a video shop in which there was a ‘World’ section. This meant we could hire films for free and indulge in one of our passions; watching every single film by Godard, Roeg, Tarkovsky… The avid art students that we were.

Yet, this was not the revolution. Next door to the café was a health-food shop ran by Desmond. His wife ran the café. And above the café there were two small rooms, which were the pursuit of Desmond’s brother. I can’t remember neither his wife’s or brother’s names but I do remember the lovely family that together they were and the unique-ness, at the time, of their establishment. His brother was an alternative practioner. Maybe chiropractor, maybe a homeopath. I can’t remember this. But he also hired the rooms out. And on a Friday evening he started to rent one of them to Shiv, a very quiet, humble guy who had converted to Sikhism and was running Kundalini yoga sessions.

Intrigued, I started attending his classes. I loved them. There were only a small number of us that came, five or six. Sometimes Shiv’s young son, about three years or four, would join and practise too. There were no yoga mats and we wore whatever we felt comfortable in. The classes ran from 6.30 – 8pm and soon he started to run a second on Tuesday evenings. I used to go to both. Over the course of the year that followed he lead us through the chakras, slowly, simply, and, with great ease, I started to develop a daily practice at home. There was no mystifying going on. No big ego. Just the work. The chanting. His gentle wisdom to guide us and no should’s or should not’s.

As is me, I worked intently, passionately in my practice. But as I did so, as energy started to move, so too an old identity and this reflected in my work at college. I spent much of my second year in tears, wandering around the studios, not knowing what I was doing. Later, I learned to embrace this not knowing, but, at the time, there was pressure, intense pressure, to ‘perform’, to be ‘certain’, to be ‘clear’. I was at Goldsmiths’, studying fine art textiles and we were following in the swathe of Damien Hirst and the like who had not long left. Saatchi came around the degree shows to cherry pick the new bright things and many were swept up in buzz of celebrated future careers of stardom. Steve McQueen, the now film director, was in the studio next door. He was a peaceful soul, wore his satchel over his shoulder and kept himself to himself. He found his limelight many years later, but through hard graft and dedication. And possibly with a bit of good fortune here and there.

But the revolution did not lie in my college course. It lay, instead, with Shiv and his weekly offerings. As we worked through the chakras over the months, we came to the third eye. He led several classes in which all we did was simply sit for 90 minutes and work with our eyes. Circling, with lids closed, in figures of eight and, with our attention, observing the points in which we ‘jumped’ over or pulled away from in our awareness.

Yes! Here lay my revolution, the one that has never left me. Instantly, I became fascinated in the points I erred away from. Mightily curious at what sat within, mightily intrigued at what pulled me away. What was this ‘something in between’? I wanted to explore. And my questioning soon began to feed into my college work. My degree show was largely formed of it. The place where we are and were we slip and disappear to. Away from. This in and out of space, seemingly inhabited, yet seemingly not.

Shiv stopped teaching the classes before my final year but I continued to practice at home. And I started to practice in the water too. Breath of Fire, chanting Sat Nam, Hari Nam…. My energy grew vibrant and I started to see my future. This exploration was my future. I had a magnetic pull to whatever it was that I pulled away from, in that place of somewhere in between.

It’s almost twenty-five years now of this pondering, this preoccupation. Wow! That’s a mighty almost quarter of a century. I have changed greatly over that time, as of course, as do we all. I have learned a lot. I have brought my awareness to a lot. And I have pulled away from a lot. I have too pulled away from the yoga-mat lead craze that exists in what seems every warehouse corner. I have found one or two teachers since my time with Shiv that I have resonated with, though neither taught Kundalini. Many talk too much for what I enjoy most in a class. I really enjoy the space of non. The space in which I can climb inside and discover. I have practiced at home, sometimes. Usually a combination of Qi Gong, Body Mind Centring, Alexander Technique and bits. And there are times in which I haven’t. Sometimes I like not to attend so greatly. But whether in attendance or not, what caught my fascination and curiosity so magnificently in my early adulthood has never left.

This year, in grieving for my mother and grandmother, I have wanted to enquire deeply and adventure inwards. It has been necessity. It too has been a year in which I am immensely grateful to have come upon a facilitator who has enabled my understanding to grow, as well as rest, in my internal reflection. Joanna Watters, who ran the Grow the Grown Ups programme that we participated in May, is currently holding a monthly group in London. If you could witness my insides now, you would see my jig of delight as I write this. Her level of questioning and investigation, voices aloud the one that I inhabited in many ways before we had children. I LOVE her guided questions. Soft and filled with compassion, lightness and non-judgment, they form the invitations to gently converse with the blind spots, the ‘somewhere in between’s’, currently sitting within me. Some are of old, some new. Some shouting loudly for attendance, others hiding. All longing, in their ways, to be seen.

This week was the first session with her. I arrived full of beans and excitement, and left shaking. Within the two and a half hours, we welcomed much of what we often would prefer not to witness. We sat with ourselves and our own possible reservations to journey in. And we moved physically, slowly, with presence, waking up spaces of resistance, with open hearts and kindness. We repeated the words, ‘I see you, I really see you’, followed by, ‘This is enough’. For me, this genuine beholding was full of silent beauty but the three words that followed, painfully challenging. I had learned these words as a child in their negative connotation and every time I spoke them within, during the session, whether in speaking to myself or listening, I heard a charged bitterness and scolding from my mother. And experienced in turn, my pulling away.

Yet, in my bouncy rabbit keenness to attend Joanna’s sessions, I also held an awareness that I would bump up against, bound into these walls. For, it is part of this indefatigable, quietly insatiable, curiosity to venture in and knock on them. Ideally, knock them down. And I feel fearless of being in a space in which I can safely do so, which wonderfully is the space in which she creates.

In the days since the session, which are only a few, in the moments I have had an opportunity to reflect, I have learned something invaluable. In my years of contemplation, of sometimes with a great verve of inquisitiveness and of others of feeling stuck with no way in, I had not yet arrived at this. The ‘something in between’ is ME. That which I was seeking to unearth, to reveal, is ME. Yes, I exist in this space. Not the I of physical identity, nor that of my mind caught in thought, but the spirit of me. My spirit, that sometimes fleets and runs but so furiously wants to inhabit and create voice, resonance and, possibly most importantly, peace. Yes, this bewildered spritely spirit wandering, trying to inhabit, land, arrive on, in this earth.

For now, before I run again, I say, Welcome, loudly. And Hello! (And do another little jig inside).

Yes! Vive this slow and unfolding revolution. The one in which I am finally coming home.

One thought on “Somewhere in Between”